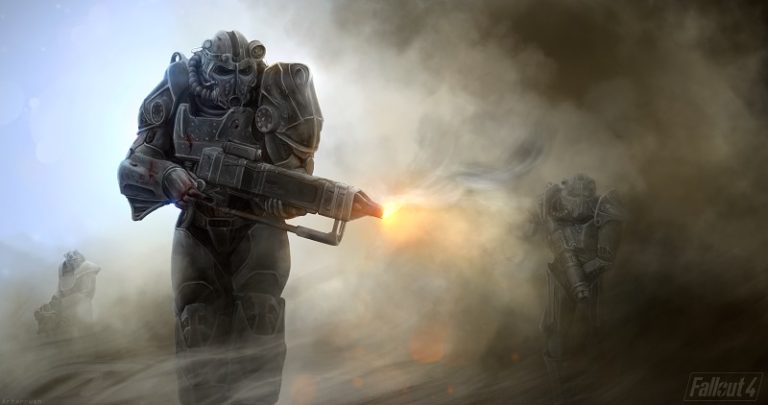 Do you love playing Fallout 4? Well, who doesn’t! These Best Fallout 4 Weapon Mods will further enhance your gameplay.

As one of the best Fallout games in the series, Fallout 4 (released in 2015) still has a big player base even today.

This is especially true for the PC version of the game, as it offers various ways to modify the game with various mods that can enhance the gameplay experience for the players.

With Fallout 4 on PC, you can apply mods that can enhance or modify the game environment, characters, weathers, textures, graphics, and so on.

Just by installing one of these mods, you will be able to upgrade your experience in this game and make it more suitable to your preferences.

Here are the 20 best Fallout 4 weapon mods that can help make this game more fun and enjoyable to play:

Hellsing – The Jackal is the mod that is inspired by the anime series Hellsing.

The Jackal is the ultimate weapon given to Alucard, which is the custom-made weapon suited to be used only by Alucard.

It delivers more firepower than his usual weapon, and it can deal more damage to the enemies.

With this mod, you can deal more damage to your enemies in Fallout 4 using the same unique and stylish weapon given to Alucard in Hellsing.

As Vektor is a weapon system that is made based on Vektor Kriss Polymer SMG. 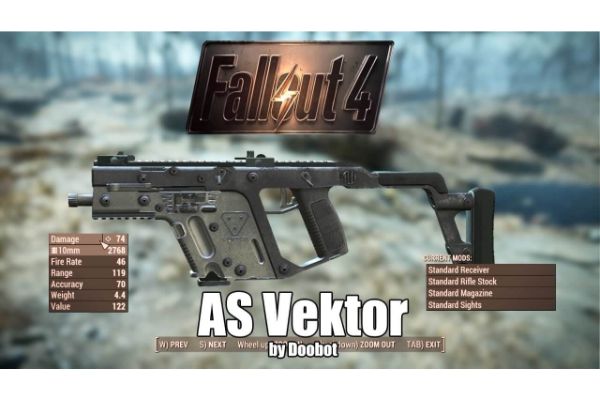 This weapon can be used as a medium-sized automatic weapon in Fallout 4, allowing you to spam your enemies with bullets without letting them to escape.

This weapon might not be able to deal heavy damages to your enemies, but it can deal rapid light-to-medium damages to them, which will allow you to kill them fast.

ACR-W17 is the weapon mod that will deliver you the Adaptive Combat Rifle (ACR) in Fallout 4, allowing you to use this weapon in your combat. 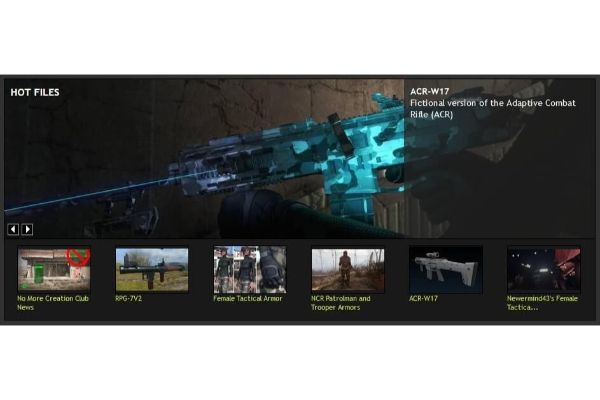 The Adaptive Combat Rifle was first introduced in COD: Modern Warfare 2, and this mod is trying to bring the glory of this weapon into Fallout 4.

It has various features that allow you to bring maximum damages to your enemies in this game. 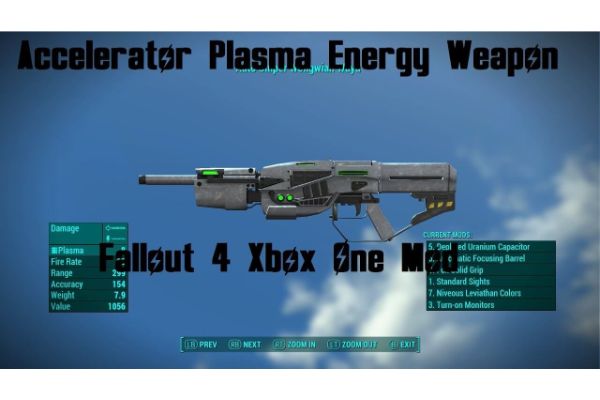 It has the accelerator features, which can translate into more damages, faster projectile speed, versatility, and reliability.

This is the weapon that bears a lot of cutting-edge features that are needed in your combat against your enemies in Fallout 4.

Riddick Hero Rifle is the weapon mod that is used based on the movie Chronicles of Riddick. 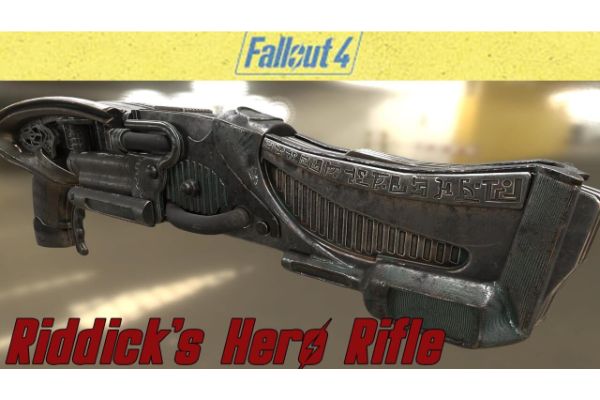 This is the weapon used by Riddick in the movie which is called the Hero Rifle.

This weapon mod provides the replica of the Hero Rifle as seen in the movie, with features matched to the movie as close as possible.

It is the type of shotgun weapon that can deal heavy damages to your enemies.

Desert Eagle – Standalone Handgun is a port of mod that was first built for Fallout: New Vegas.

In this mod, you will be able to use the Desert Eagle in Fallout 4 with all its features.

Also, this weapon can be customized to your liking.

It also has custom textures and sounds, which make it a bit different from the original mod available for Fallout: New Vegas.

The M14 Standalone Rifle is a type of old-school rifle that you can customize with lots of extras and features. 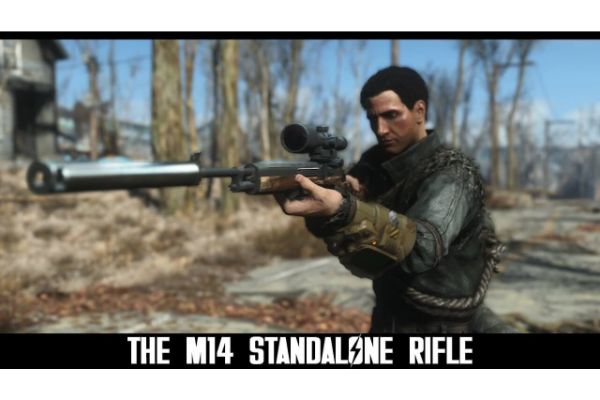 This weapon mod delivers you the vintage rifle to be used in your combat against your enemies in Fallout 4.

It has been used since the era of World War 2, and it has been an iconic weapon in the US Military since then.

This mod gives you the original textures that give the realistic look for this weapon.

R91 Standalone Assault Rifle is the weapon mod built with inspirations from the R91, which is the rifle weapon that you can use in Fallout 3. 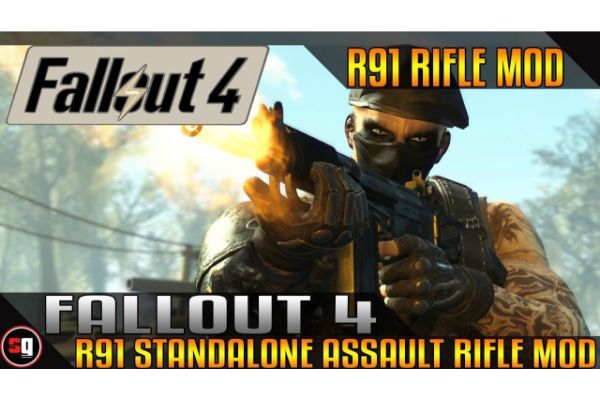 This mod delivers the R9 assault rifle to Fallout 4, along with custom textures and meshes.

Not only that, you can customize this weapon to your heart’s content with various customization options that are available for it.

The Widow Shotgun is the mod that allows you to use the type of stylish and modular shotgun with two barrels in your Fallout 4 gameplay. 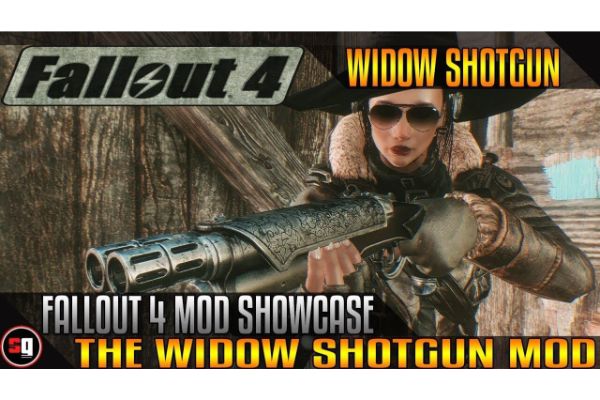 This stylish shotgun can be used to damage your enemies heavily.

Moreover, the weapon itself has its own story behind it, which you will find when you use it in this game.

There are various features available for this weapon.

The Modular Simonov PTRS-41 Anti-Tank Rifle is the mod that will bring the PTRS-41 anti-tank rifle into your Fallout 4 game. 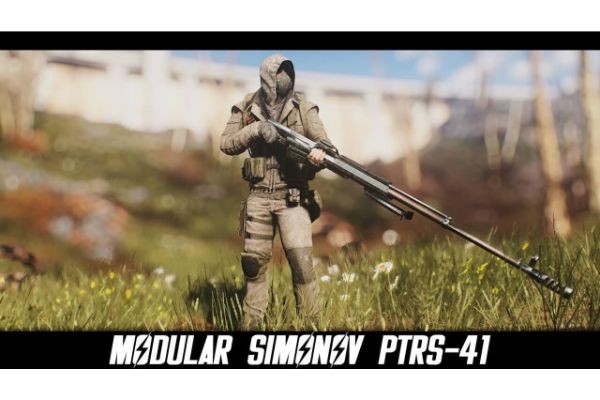 This weapon mod is also available for both Xbox One and PS4.

With this mod, you will be able to use the PTRS-41 to destroy tanks and heavy objects in this game with a considerable destructive power.

Other than that, this mod also has other types of anti-tank weapons, which are Type76 and Black Shark.

Weaponsmith Extended is the mod that brings a collection of the best weapons you can use on Fallout 4. 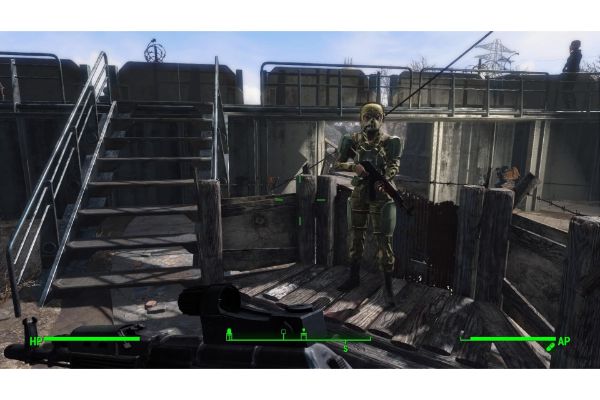 It also adds some features that you can only get once you install this mod to your game.

This mod is essentially a bundle of weapons that come in various shapes and sizes, allowing you to use them as you see fit.

The list of weapons that you will get in this mod includes Nambu Pistol, MK14, Hero Rifle, M1 Armory, and plenty more.

M1 Garand – A WWII Classic is the weapon mod that allows you to use the M1 Garand weapon, which is one of the weapons used in the WWII.

With this mod, you will be able to equip this weapon and use it in your battle against your enemies in Fallout 4.

It is designed to resemble the real thing as closely as possible, so you can really feel the use of this weapon in your gameplay.

It can be used as a standalone weapon in this game.

Wattz Laser Gun is a mod that will bring Wattz 3000 Laster Rifle, a rifle that is the advanced version of the Wattz 2000 Rifle found in Fallout and Fallout 2. 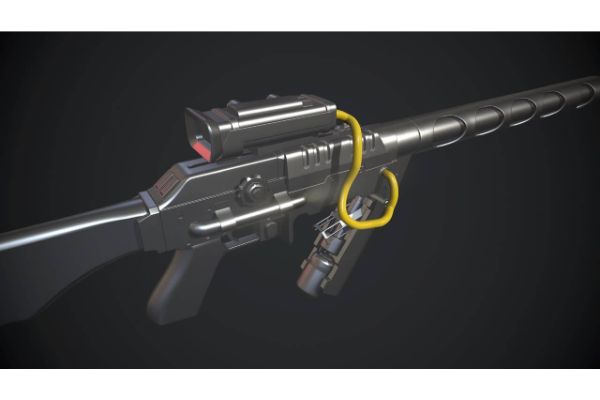 This weapon still carries the design that is closely resembling that of Wattz 2000 found in previous Fallout games.

It adds various types of animations, textures, models, and more.

It can deal quite big damage to your enemies when used.

The Kalash is a modular weapon originated from Russia, which is still widely used today due to its adaptability and ease of use. 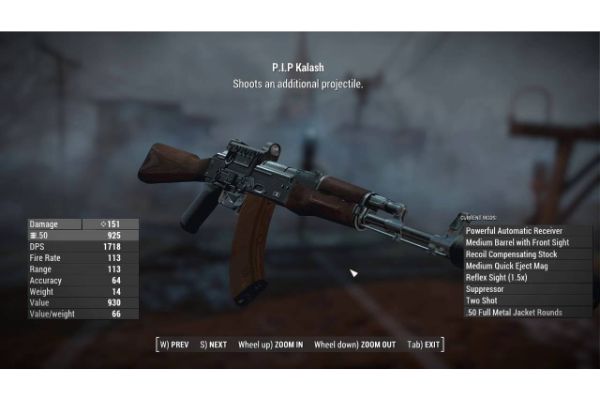 It is a combination of various weapons, which you can easily assemble as a modular system for your rifle.

This is the mod that will bring the Modular Kalash Assault Rifle into your Fallout 4 gameplay, with features more or less similar to the real thing.

Insanitys Celtic Katana is a weapon mod available for Fallout 4, which is a port of the same mod released for Skyrim.

This weapon mod primarily allows you to use a katana as your main weapon to combat your enemies in Fallout 4.

However, it also includes other items, such as tanto and scabbard armors.

The katana can deal quite good damage to your enemies, and you can also increase the damage-dealing element of this sword when you upgrade it.

Weapon Balance Overhaul is the mod that allows you to balance your weapon damage based on the realism and balance for each weapon. 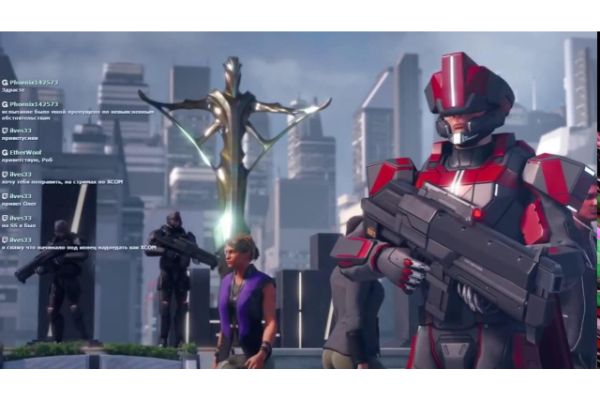 If you think that some weapons don’t have the balance in the damages dealt by it, or if you think they are not realistic enough for you, you can use this mod to balance your weapon damage and make it more real to use.

This mod applies to the damages dealt to your enemies and the players.

Lightsaber Renew is the weapon mod that allows you to use the lightsaber as your weapon in Fallout 4. 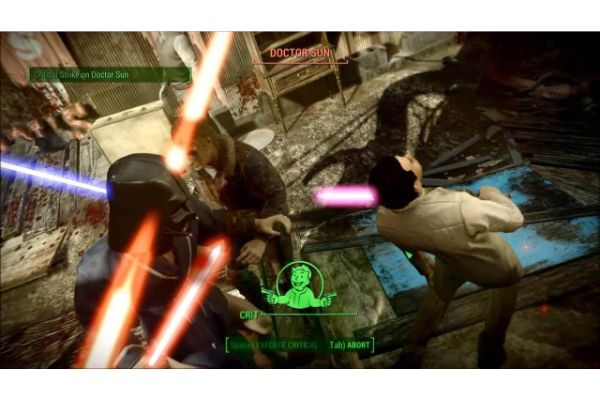 So, you can have a feeling of playing Star Wars in this game.

Each lightsaber has its own unique animation that you can enjoy when equipping it as your primary weapon.

The M9 Standalone Pistol is the weapon mod that allows you to use the M9 standalone pistol model in your Fallout 4 gameplay. 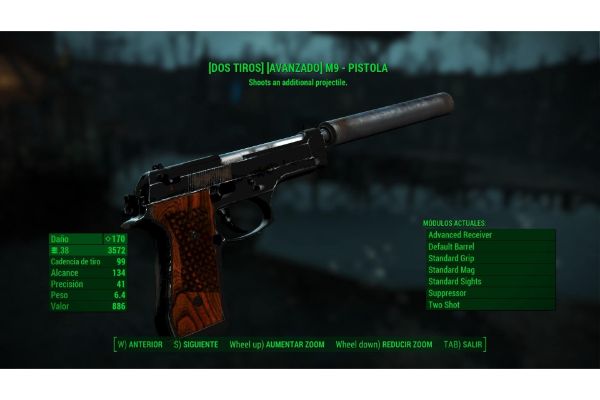 This pistol is different from the regular pistols that you can find elsewhere.

It has a great deal of features that will be useful in your combat against your enemies in this game.

It has new models, textures, and full animations when used by your character.

This is the gun that you want to have in your fight against your enemies.

Hunting Rifle (Sniper) Damage Increase is the weapon mod that attempts to increase the damages dealt by sniper rifle in this game. 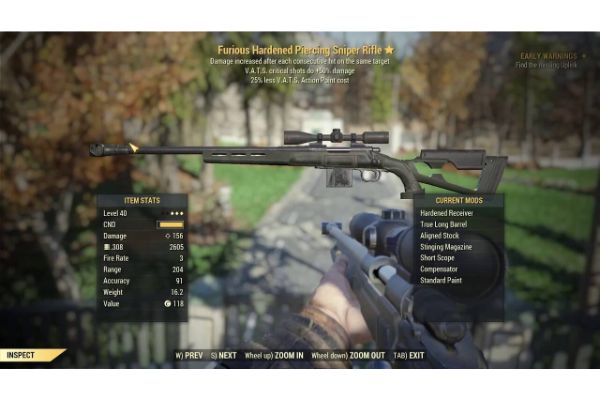 It increases about 35% of the damage dealt by this weapon.

Fusion Gun is the type of energy weapon that can be added to Fallout 4 when you install this mod. 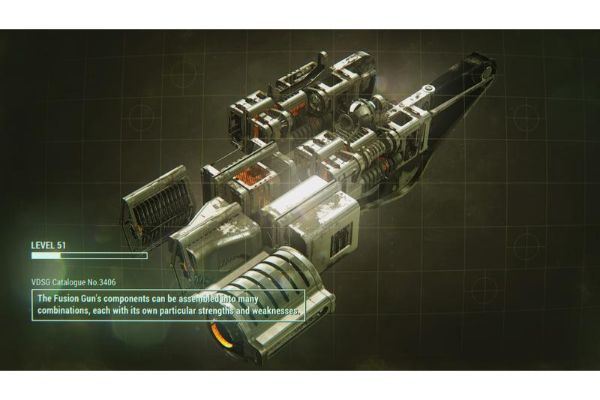 This is the weapon mod that gives you the high-powered energy weapon, which you can customize with various attachments to it.

Lots of attachments are available to add more features of this weapon.

Among the many mods that are available for Fallout 4, the weapon mods are the type that many players are using to enhance their gameplay experience with this game.

With the weapon mods, you can modify your weapons, use custom weapons, and change various aspects of the weapons that you use in this game, so that you can blast through your way in the game world with a stronger equipment.

These weapon mods can also make the game easier to play, since they provide various effects that can make it easier for you to kill your enemies in this game.

There are hundreds of weapon mods that are available for you to use but choosing the best among them would be difficult sometimes.

That’s why you can take a look at this list to find out the best weapon mods that you can use in this game.

One of the best ways to enjoy your Fallout 4 gameplay more is to install some weapon mods.

These mods will radically change the weapons that you use in this game, which means that you can strengthen your characters with it.

With certain weapons, you can blast through the game world without any problem and kill as many enemies as possible along the way.

So, it’s time for you to use better weapons in this game. Install these best Fallout 4 weapon mods today!

So tell me, which one of all thesebest Fallout 4 weapon mods are your personal favorite and why?