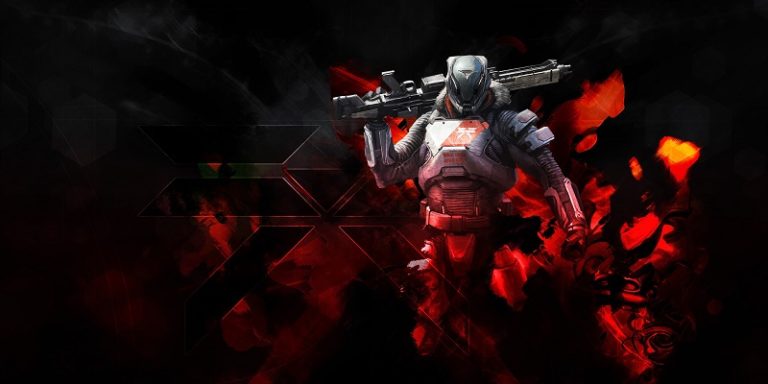 Destiny 2 is an online multiplayer first-person shooter game that was released in 2017 as the second installment of the Destiny franchise.

The game is developed by Bungie, and it is available in PS4, Xbox One, Microsoft Windows, and Google Stadia.

Aside from being a first-person shooter game, the game also has elements of action RPG, allowing you to level up your characters to become stronger in the game.

The game is currently available as a free-to-play game.

In Destiny 2, you can use various types of weapons to fight your enemies.

The weapons that you can use range from rifles, bows, shotguns, grenade launchers, sidearms, and plenty other weapon types.

One of the weapons that is considered reliable and has seen many uses in this game is the Pulse Rifles.

Different from other types of rifles, the Pulse Rifles are the weapons that are suited to be used to combat enemies in most situations in this game.

It is good to be used as a standard weapon if you want to go through this game easily and smoothly.

There are lots of Pulse Rifles that you can use in this game, and each one of them can provide different features for you.

Below is the List of Best Destiny 2 Pulse Rifles

Here are the top 20 Pulse Rifles that you can use in Destiny 2 to help you go through the game with ease:

Bygones is a legendary kinetic pulse rifle that has the adaptive frame which is sturdy and reliable to use. 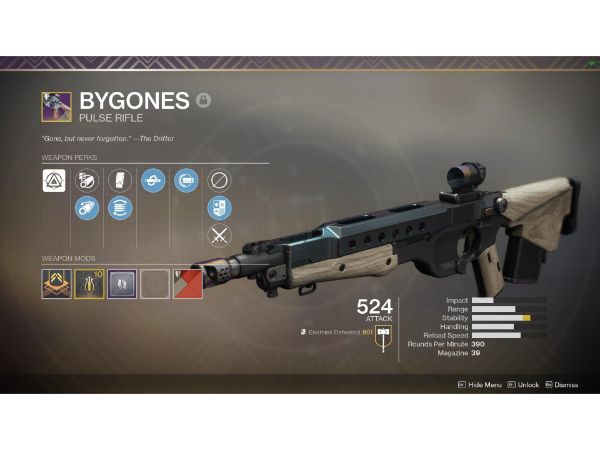 The barrel can be adjusted between lightly vented and balanced.

It can be used as a fully automated weapon, and you can increase the damage of this weapon if you reload it after killing an enemy.

Blast Furnace is the legendary pulse rifle with its main perk being called Aggressive Burst, allowing you to shoot fire in two bursts and damage your enemies hard with it. 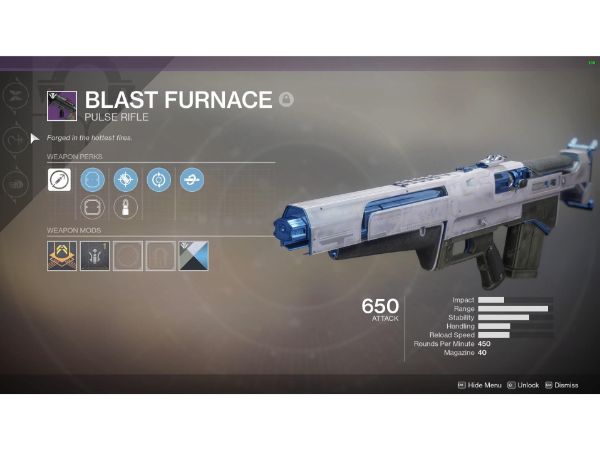 On the barrel type, you can use either superior scope or far scope. 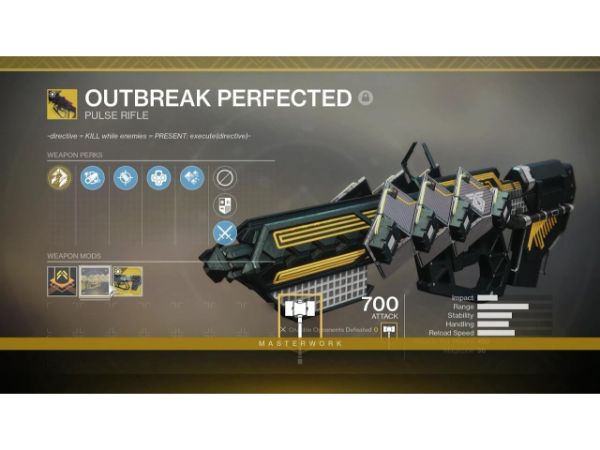 It uses a weighty barrel extension that increases the attack range of the weapon.

With this weapon, the more nanite swarms that you put on your enemies, the more damages that you can deal.

Vigilance Wing belongs to the range of exotic weapons in Destiny 2, featuring Harsh Truths as its main intrinsic perk.

It fires five-round bursts that can devastate many enemies at the same time.

This weapon is capable of giving you the regenerative health effect when you have a nearby ally killed.

Aside from that, it also gives an effect of increased movement speed.

It uses the Alloy Magazine, which allows you to reload the weapon faster when it is out of ammo.

RELATED  20 Best Skyrim Graphics Mods, You should install right away

Go Figure is a legendary pulse rifle that you can use in Destiny 2, providing you with Aggressive Burst, which shoots two burst fires that deal lots of damages to your enemies. 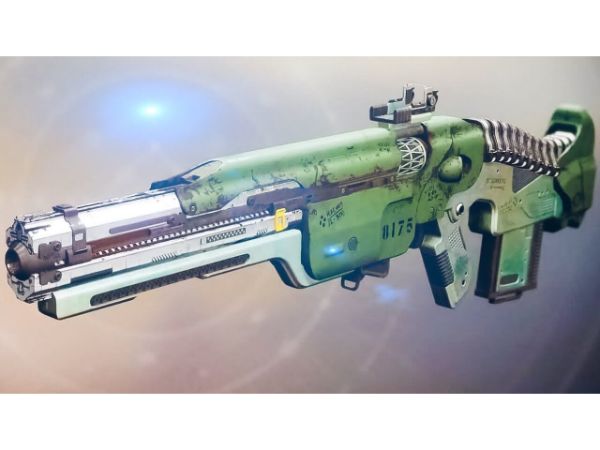 You can choose between two main magazines for this weapon, which are Appended Mag if you want to have a higher capacity magazine, and Accurized Rounds if you want to fire in a longer distance.

This weapon allows you to deal more damages if you reload the weapon after killing an enemy.

Right Side of Wrong

Right Side of Wrong is a legendary pulse rifle in Destiny 2 that you can use to shoot two-burst fires in one trigger. 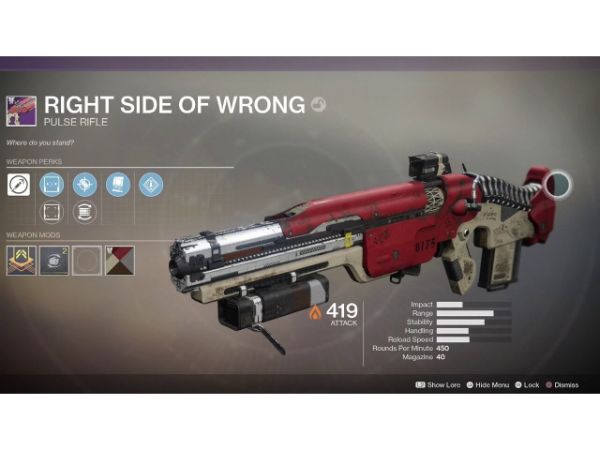 The magazines that can be used for this weapon are Accurized Rounds and Steady Rounds.

The Accurized Rounds magazine allows you to fire at longer distances with high damages to your enemies.

The Steady Rounds magazine allows you to control your recoil better with your weapon, which increases the weapon stability a great deal.

Redrix’s Broadsword is the legendary pulse rifle that you can use to deal high damages to your enemies.

However, the firing of this weapon is quite slow when compared to other pulse rifles.

You can increase the accuracy of firing for this weapon by steadying your position and aim this weapon to lower areas.

It has a stable barrel that you can attach to the weapon, improving its stability and recoil direction.

Nightshade (the regular version) is a legendary-type pulse rifle in Destiny 2 that allows you to fire your enemies while moving quickly due to its excellent handling. 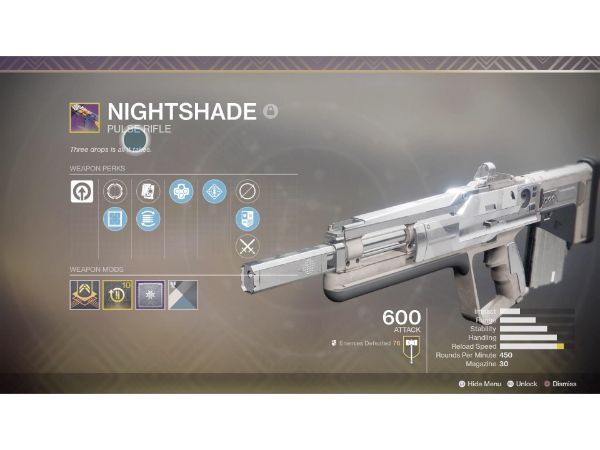 It is lightweight, and you can use either Tactical Mag or Armor-Piercing Rounds as the default magazine.

The Tactical Mag allows you to improve the weapon’s stability, reload speed, and magazine size.

Meanwhile, the Armor-Piercing Rounds magazine allows you to increase your firing range and deal extra damages to enemies with shields and other protections.

Graviton Lance is an exotic pulse rifle weapon that has Black Hole as its main intrinsic perk. 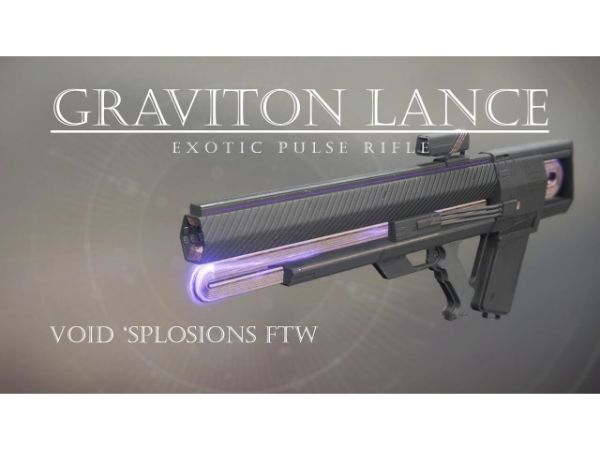 The Black Hole perk allows you to create a space-time hole for your second burst fire, which can damage your enemies greatly.

It uses a durable barrel called Hammer-Forged Rifling, which can help you to increase the range of fire for this weapon.

It also has Accurized Rounds for its magazine, allowing you to fire longer distances to your enemies.

Claws of the Wolf

Claws of the Wolf is a legendary pulse rifle you can find in Destiny 2, which has the Rapid-Fire Frame, allowing you to fire rapidly at your enemies. 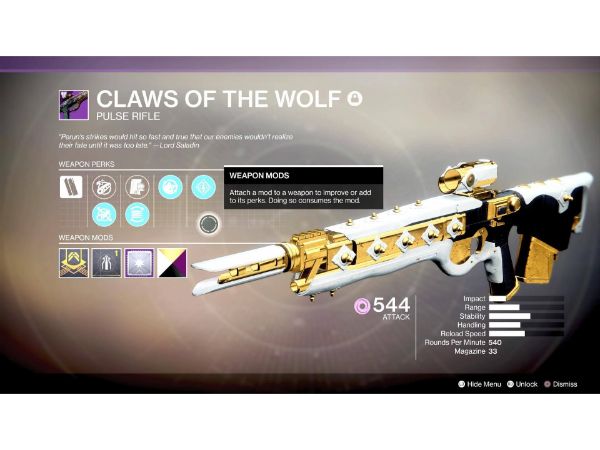 The frame allows you to have more ammo reserves and faster reload speed when the magazine is empty.

RELATED  How have Gaming Laptops Improved in 2022?

You can also decrease the reload time after performing precision kills at your enemies.

You can fire this weapon in full automatic mode, allowing you to perform rapid fire in a single trigger press.

Bad Juju is an exotic pulse rifle that can be used to trigger fully automatic fires to your enemies in Destiny 2.

This weapon has a special feature which allows you to refill the magazines when you kill the enemies, as well as increase the damages dealt to the enemies for a short duration.

It is also equipped with a ranged durable barrel by default.

Moreover, it is fully optimized for you to control the recoil process.

Inaugural Address is a legendary pulse rifle in Destiny 2, which comes with the adaptive frame by default.

This frame makes the weapon sturdy, reliable, and well-rounded at the same time.

It can be equipped with Polygonal Rifling, which is the barrel type that is optimized for you to reduce the recoil for this weapon.

This weapon can deal more damages to the enemies when you reload it after each kill.

The Time-Worn Spire is a legendary pulse rifle in Destiny 2 that features the rapid-fire frame, allowing you to reload this weapon quickly when the magazine is empty.

Also, with the rapid-fire frame, you can have deeper ammo reserves that ensure a better survival for you.

It has a primary trait called Zen Moment, which is the trait that allows you to increase the stability of this weapon as you deal more damages to your enemies.

Three Graves is a legendary kinetic pulse rifle that allows you to deal high damages to your enemies.

It has the frame called High-Impact Frame, which fires slow bullets with high damages to your targets.

It is especially useful when used in the stationary position.

The barrel types used in this weapon are Model 6 Loop and Mark 15 Lens.

The Model 6 Loop is the barrel type that allows you to target enemies using red dot and medium zoom.

The Mark 15 Lens is the barrel type that has the long zoom scope and ocular sights.

Chattering Bone is a lightweight legendary pulse rifle in Destiny 2 that is designed to give you faster movements while firing toward your enemies.

It uses the balanced barrel type called Cockscrew Rifling, which helps to increase your handling speed, stability, and range.

RELATED  Top 20 Minecraft Xbox One Seeds, Best seeds you have to use now

Sacred Provenance is a legendary kinetic pulse rifle that allows you to shoot two-burst high damage-dealing fires, whether short range or long range.

It is a great weapon to be used while crouched, as the accuracy can be increased in this way.

Agenda 5 is a legendary energy pulse rifle in Destiny 2, which allows you to fire at quicker speed.

The lightweight frame of this weapon allows you to move quickly while firing this weapon toward the enemies.

It can use Impulse MS3 and Transmission MS7 barrel types, as well as Extended Mag and Flared Magwell magazine type.

Machina Dei 4 is a legendary kinetic pulse rifle that you can obtain in Destiny 2, which can shoot high-impact fires to the enemies.

However, this weapon has a slow firing speed, but the firing accuracy can be improved when you fire from higher grounds with stationary position.

It can use various types of barrels, including Extended Barrel, Chambered Compensator, and Fluted Barrel.

Eystein-D is a legendary kinetic pulse rifle that allows you to fire high-impact bullets to your enemies.

The barrel types that it can use include GB Iron and SD Thermal.

GB Iron can provide short zoom, while SD Thermal can provide medium zoom for this weapon.

It can use the magazine types Ricochet Rounds and Accurized Rounds.

Adhortative is a legendary energy-type pulse rifle that features the adaptive frame, giving more sturdiness and reliability to this weapon.

It can be used as an automatic weapon that can perform rapid fire at enemies when you hold down the trigger button. It is also highly optimized for fast reloading.

When it comes to dealing with lots of enemies in Destiny 2, the best type of weapons that you should use is the pulse rifles.

There are many pulse rifles that you can obtain in this game. Some of them are easy to get, while some others might be hard to get.

Moreover, for some legendary types, it will be a challenge for you to obtain these weapons.

However, once you’ve obtained a good pulse rifle, you can easily improve the chance of winning in any battle against your enemies in this game.

If you don’t know which pulse rifle to use in Destiny 2, try to get some weapons in this list. You won’t regret it!